Skip to content
A day in Huelva Capital; monuments and emblematic areas

A day in Huelva Capital; monuments and emblematic areas

Beyond its coasts and its gastronomy, Huelva is a millenary city full of history. A place where different civilizations have left their own mark throughout the province, giving it a remarkable tourist interest. And when nature and the hand of man come together, history tells its own story.

Focusing on Huelva Capital, founded by the Phoenicians as Onuba, archaeological excavations have revealed prehistoric figures prior to the Tartessians. It was in 2007 with the discovery of the skeleton of a whale 3 million years old in the capital itself, which has helped historians to classify it as “the oldest city in Western Europe”.

Many historical monuments were destroyed either by the Lisbon earthquake of 1755 or by the hand of man, who did not know how to preserve them properly. Columbus’ voyage to America whose trail we can see in this former post The trail of Columbus in Huelva, did not give it the prominence it deserved, despite the fact that the sailors from Huelva played a great role in the voyage, the port of Huelva was marginalized and stagnated in the face of the growth experienced by the ports of Cadiz and Seville. It was in the 19th century when the mining operations and the railroad turned it into a modern city, creating, in turn, the city we know today.

Once the history is settled, in a very summarized way, we summarize the places and monuments that you can not miss if you decide to spend a day in Huelva.

After the IV Centenary of the Discovery of America, it became a building for offices and residences, taking the current name of Casa Colón. After having passed from one hand to another, it is now part of the municipality, being the Palace of Congresses and Exhibitions of the city of Huelva.

Monument to the Virgen del Rocío

A few steps from the Casa Colón we highlight the impressive Monument of the Virgen del Rocío. Despite being much later than the Colombina era, this monument, made in 2011, undoubtedly requires a visit as it symbolizes one of the most important traditions of Huelva.

The work, made in bronze, represents the Virgen del Rocío carried on the shoulders of her faithful. A special and characteristic moment of the province that crosses borders. The great amount of detail perfectly captures the feeling of the moment.

Columbus Monument: monument to the discoverer Faith and the dock of the Caravels

To visit it we will have to go by car or public transport, as it is located 4 km from the city center.

It is one of the symbols of Huelva. In it stands the image of Christopher Columbus facing west, the place where the navigator looked the day he left, under the sculpture are some bas-reliefs representing the Aztec, Inca, Mayan and Christian cultures.

Commissioned by the Columbus Memorial Foundation, it was inaugurated in 1929, created by Gertrude Vanderbilt Whitney and donated by the United States.

An idyllic place to contemplate the marshes on the banks of the Odiel River.

One of the main attractions of the capital. It was built between 1874 and 1876 with the purpose of loading the mineral extracted from the Riotinto Mines in the port of Huelva, hence its name.

It was used until 1975, when ships began to use a new facility in the port of Huelva. In 2003 it was declared an Asset of Cultural Interest.

We recommend a walk on its structure, completely accessible and free of charge, during sunset. A real treat for the senses. In addition, at night, the pier is fully illuminated, being one of the main attractions for those who love photography.

This is a housing development built by Rio Tinto Limited Co and located on the Cerro de San Cristobal. These striking colorful houses make the area stand out by mixing styles as disparate as Andalusian, colonial and neo-Mudejar. 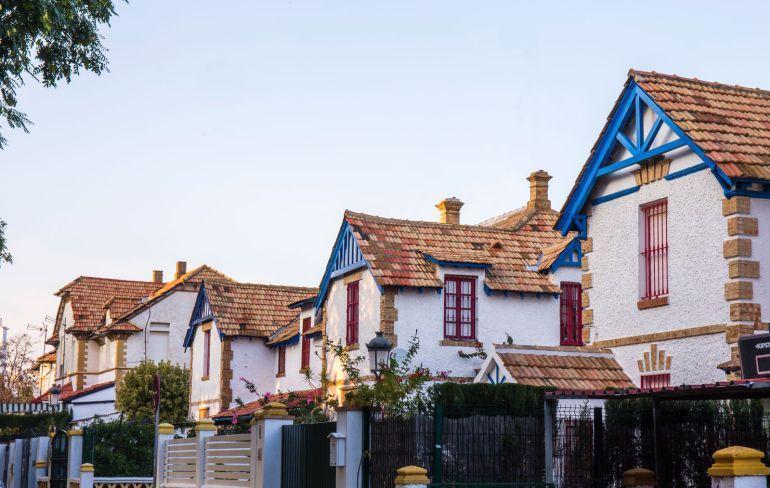 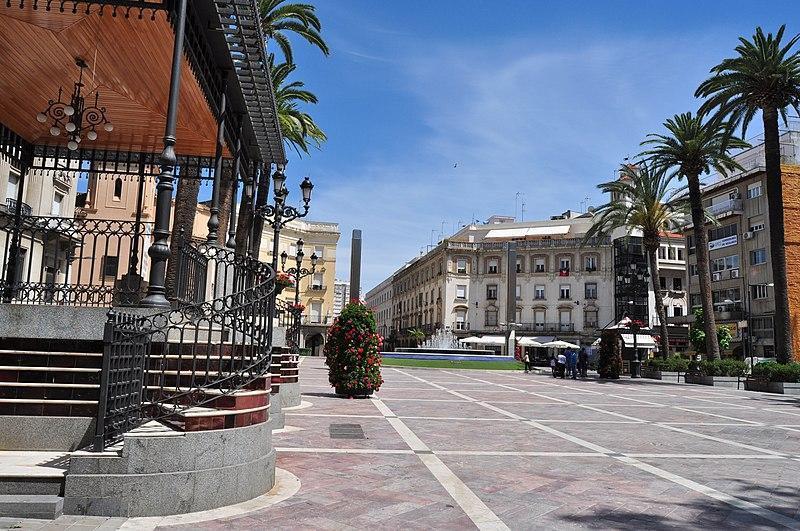 This square is the nerve center of the capital. The main pedestrian streets of the historic center start from it. Here you will find emblematic buildings such as the Palace of the Dukes of Medina Sidonia, in the eighteenth century, the Bank of Spain and the Convent of the Augustinian Nuns.

Its diverse gastronomic offer has made it one of the main meeting points for tourists and locals alike.

We cannot forget in this route the Cathedral of La Merced. A temple that will surprise you as it breaks completely with what we think of as a cathedral. This is because it is actually the Church and Convent of La Merced.

It is characterized by its colonial style and its two unfinished baroque towers. Inside you can contemplate the different altarpieces and carvings of the eighteenth century.

This sanctuary, whose construction dates back to the 15th century, stands out for being located on the Conquero hill with incredible views of the marshes of Huelva.

The place was named as the seat of the patron virgin of the city, La Virgen de La Cinta to whom Christopher Columbus went to pray after his successful expedition to America. 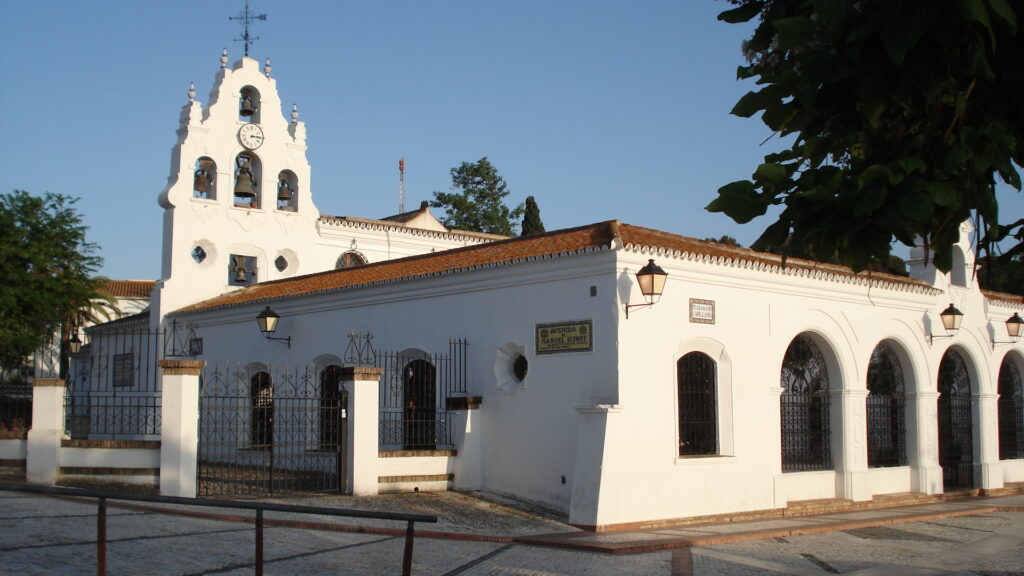 We are sure that our recommendations will make you enjoy an incomparable day in Huelva Capital, less than an hour away from AMA Residences Andalucía. If you want to know more and need any kind of recommendation, we will be happy to help you.

We use our own and third-party cookies to improve our services by analysing your browsing habits and to be able to offer you the best experience based on your browsing habits and your profile. By clicking on the different options you can accept, reject or configure cookies. You can change your mind and customise your consent at any time by clicking on cookie settings. For more information you can visit our Cookies Policy.

This website uses cookies to improve your experience while you navigate through the website. Out of these, the cookies that are categorized as necessary are stored on your browser as they are essential for the working of basic functionalities of the website. We also use third-party cookies that help us analyze and understand how you use this website. These cookies will be stored in your browser only with your consent. You also have the option to opt-out of these cookies. But opting out of some of these cookies may affect your browsing experience.
Advertisement
Advertisement cookies are used to provide visitors with relevant ads and marketing campaigns. These cookies track visitors across websites and collect information to provide customized ads.
Analytics
Analytical cookies are used to understand how visitors interact with the website. These cookies help provide information on metrics the number of visitors, bounce rate, traffic source, etc.
Functional
Functional cookies help to perform certain functionalities like sharing the content of the website on social media platforms, collect feedbacks, and other third-party features.
Necessary
Necessary cookies are absolutely essential for the website to function properly. These cookies ensure basic functionalities and security features of the website, anonymously.
Other
Other uncategorized cookies are those that are being analyzed and have not been classified into a category as yet.
Performance
Performance cookies are used to understand and analyze the key performance indexes of the website which helps in delivering a better user experience for the visitors.
SAVE & ACCEPT
Go to Top